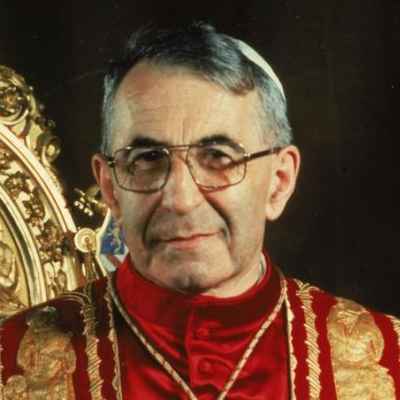 He obtained a doctorate in theology based on the work of Rosmini Serbati (1797-1855), a man whose 40 statements contained in his books were condemned by the Holy Office of the Catholic Church in 1887.

He did not agree to the papal coronation, which only confirms that he was not a Catholic pope.

He was, however, “clothed” in a pallium as the “Bishop of Rome” – the favorite title of Anglicans who successfully brought the papacy to the level of the Archbishopric of Canterbury.

He dismissed the Vatican guard, got rid of the “Sedia gestatoria” and abolished the title “Pontifex Maximus”.

Only thirty days after the election, he died in more unexplained circumstances.

Although his rule was short, he followed the expectations of his predecessor, antipope Paul VI and his anticardinals, which he promoted.

In September 1978, he set as a good example for self-denial and dedication to duties, a mason and satanist, Giosue Carducci, a professor at the University of Bologna, founder of two masonic lodges and the author of a long and blasphemous “Hymn to Satan”.

Antipope John Paul I was an ardent feminist, as indicated by his letters written, among others to the playwright Carlo Goldoni included in his short-lived book entitled “Humbly Yours”.

He was willing to speak out amazing heresies like:

God is a woman.

Regarding religious freedom, he openly stated that also lies and heresy have their rights:

For years I have taught that only the truth has rights. Now I was convinced that we were wrong. (Time Magazine)