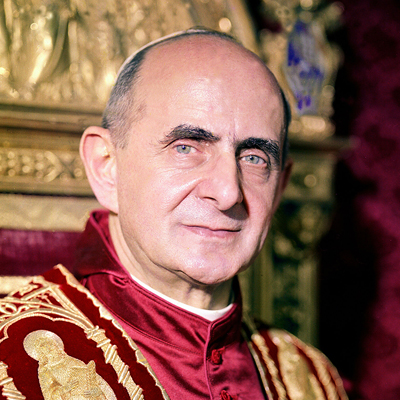 Antipope Paul VI betrayed Christ, therefore he was certainly not a member of the Catholic Church but a heretic.

He was a supporter of Masonic ideas and a friend of Freemasonry, which was repeatedly condemned by the Catholic Popes many times.

The Grand Master of the Masonry, Gamberini on the day Montini was elected to Antipope, stated:

Here is the man we need!

Carlo Falconi wrote in one of his books:

During his journey to the Holy Land (in 1964), Antipope Paul VI kissed on the Mount of Olives, the Orthodox Patriarch Athenagoras I, Freemason of the 33 degree. Then, on the eve of the closing of Vatican II Council, the pair lifted the mutual “excommunications” launched in 1054.

Later on, Paul VI would give his “pastoral” and his “ring” to the Burmese Buddhist U’thant, Secretary General of the UN.

On November 13, 1964, he finally resigned from the insignia of the papal power – the “tiara” (the “triregno”), which only confirms that he was not a Catholic pope.

In the first speech of the Vatican II Council, the antipope Paul VI adopted the principle of “modernist heresy”:

The essence of this statement is as follows:

Above all, this Christian doctrine be studied and exposed through the forms of literary investigation and formulation of contemporary thoughts.

The “principle” enunciated by Antipope Paul VI, on the contrary, becomes the negation of that of the Apostolic Tradition, wanted by God, and it reverses the Magisterium of the Catholic Church.

He putted on the teacher’s desk, in place of “Revealing God” and of the “Teaching Church”, the method of man’s autonomous investigation and the formulation of a purely human and arbitrary doctrine, peculiar to the philosophical-literary style of modern man – therefore, of the man of all ages, mutable with the times – oblivious that only the “truth” revealed by God is the sole immutable and eternal truth.

This “principle” is unquestionably a heresy against the centuries-old Magisterium of the Catholic Church.

It takes the place of the “dogmatic” principle, alone to offer proof and certainty of the “Catholic truth”.
The teaching Catholic Church has always taught that the “reason of believing” does not lean at all upon scientific conquests, achieved through man’s intellect, for the “reason of believing” rests exclusively upon the Authority of Revealing God and upon that of the Supreme Magisterium of the Catholic Church, which received from Jesus Christ the mandate to teach it officially and in an infallible manner.

In a further speech, the antipope Paul VI declares that the Vatican II Antichurch “declared himself as a Servant of Humanity”:

… All this doctrinal wealth points but to one direction: to serve man.

The Vatican II Antichurch declares himself a “servant of man” and gives him honor in his cult.

So, exactly the opposite of the Catholic Church, which is always the model of the Blessed Virgin Mary (Ancilla Domini), declares herself a Servant of the Lord God and reveals his honor to Him. 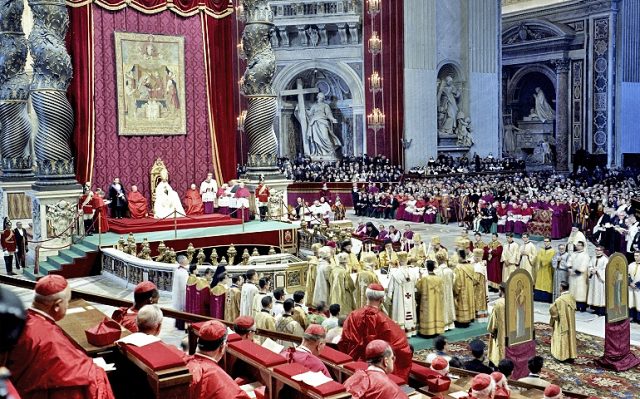 Thus saith the Lord: “Cursed be the man that trusteth in man, and maketh flesh his arm, and whose heart departeth from the Lord”. (Jeremias 17, 5)

Shan’t modern man, one day, as his scientific studies progress and discover realities hidden behind the mute face of matter, come to prick up his ear to the wonderful voice of the Spirit palpitating in it? Shan’t it be the religion of tomorrow? Einstein himself perceived the spontaneity of a religion of today? Isn’t the work already in progress along the trajectory leading straight up to religion?

It is clear that the religion of tomorrow would no longer be that of Jesus Christ, that which is communicated to man through the Grace of the Faith, of the Holy Gospel, of the Passion of Christ, of the Holy Eucharist. No! That other “religion” of his shall be the “religion of the universe”, a result, that is, of the “straight trajectory” traced by work and scientific research. A “dream”, however, which has nothing to do with the Christian Faith, for Christianity is Divine religion, flowing out from the Sapience of God, and thus contrary to the sapience and preferences of the man fallen with the original sin.

Could the Church, could we but look upon him (man) and love him? The Council is a solemn act of love toward humanity. May Christ assist us so that it be truly so.

All his writings and speeches give grounds for asserting that the center of his love was not God, but man. He always referred to him, he was guided by his judgments and actions.

This cult of man leads in a straight line to the equality myth of all people – hence the equation of “classes” as well as “universal democracy”, which is nothing more than Masonic universalism repeatedly condemned by the Catholic Popes.

At the last public Session of the Vatican II Council, the antipope Paul VI made “profession of faith” of the antichurch:

The Church of the Council – said he – has much focused on man, man as he really is today: living man, man all wrapped up in himself, man who makes himself not only the center of his every interest but dares to claim that he is the principle and explanation of all reality … Secular humanism, revealing itself in its horrible anti-clerical reality has, in a certain sense, defied the Council. The religion of the God who became man has met the religion of man who makes himself God. (…) But we call upon those who term themselves modern humanists, and who have renounced the transcendent value of the highest realities, to give the Council credit at least for one quality and to recognize our own new type of humanism: we, too, in fact, we more than any others, honor mankind; We have cult of man! 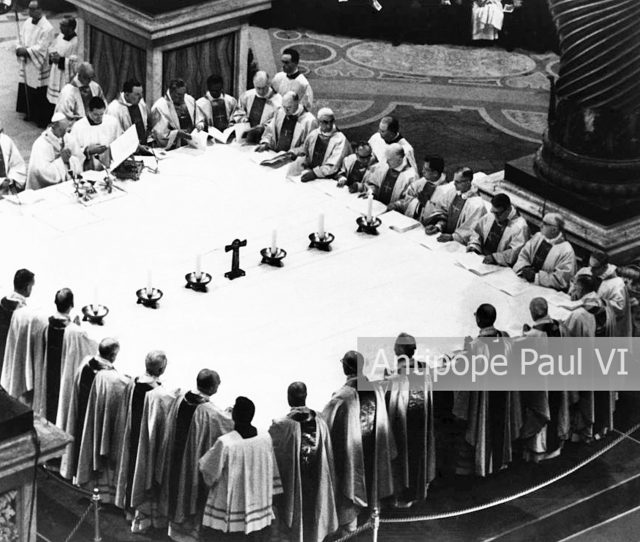 Then Jesus saith to him: “Begone, Satan: for it is written: The Lord thy God shalt thou adore, and him only shalt thou serve“. (Matthaeum 4, 10)

This servant of Antichrist also denies in one of his speeches an ascetic lifestyle of Catholic Saints as the best way to reach sanctity:

We have certainly intended to talk of the severity of the Saints toward the ills of the world. Many are still familiar with the books of asceticism that contain a globally negative judgment upon earthly corruption. But it is also certain that we do live in a different spiritual climate, having been invited, especially by the recent Council, to bring to the modern world an optimistic look towards its values, its achievements … The celebrated Constitution “Gaudium et Spes” is in its whole an encouragement toward this new spiritual approach.

Antipope Paul VI also supported the whole encyclical “Pacem in Terris”, which is entirely inspired with the “Declaration on the Rights of Man”.

It is therefore consistent with the rights of “freedom”, of “universal peace”, in accordance with the Masonic principles, which has been repeatedly and completely condemned by the Popes of the Catholic Church.

The program of Antipope Paul VI was to drown the Kingdom of God in the universal false ecumenism of faith in man and to cult of man.

Which is not another: only there are some that trouble you and would pervert the gospel of Christ. But though we, or an angel from heaven, preach a gospel to you besides that which we have preached to you, let him be anathema. (Epistula Ad Galatas 1, 7-8)