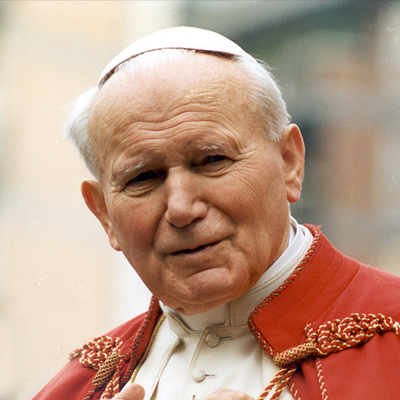 The philosophical system of Karol Jozef Wojtyla originated from a Jew born in the Czech Republic, Edmund Husserl (1859-1938).

He believed that it would be possible to use the methodology of the phenomenologist Max Scheler as a starting point to rebuild the Christian ethics.

All this was reflected in Wojtyla’s habilitation thesis entitled “Assessment of the possibility of basing Christian ethics on the assumptions of Max Scheler’s system” written in the old Polish lands on the Marxist-controlled Jagiellonian University.

His contacts turned into a close friendship with the antipope heretic Paul VI and resulted in a fast career in the hierarchy of the Vaticanum II sect.

He was nominated as a member of the “pontifical commission” established to examine the possibility of integrating oral contraception (that is sin) with Catholic moral theology.

The person who set the election of Wojtyla to the throne of the Vaticanum II Antichurch was the anticardinal Benelli – well known for his extremely modernist attitude.

Wojtyla, like his predecessor, Antipope John Paul I, refused to make an oath and to crown with Tiara, while taking office.

In December 1983, with Lutherans in Rome, praising heretic Luther for his “profound piety”, he took part in the celebration of the 500th anniversary of Luther’s birthday by participating in a Lutheran church “service” in Rome. During this event, he wore a stole – a liturgical robe, which the priest should assume only when he participates in sacramental activities.

He (Martin Luther) has now been declared a heretic; and so also others followers of Martin’s pernicious and heretical sect they shall likewise share his punishments and his name, by bearing with them everywhere the title ‘Lutran’ and the punishments it incurs.

Whoever prays with heretics becomes a heretic himself. 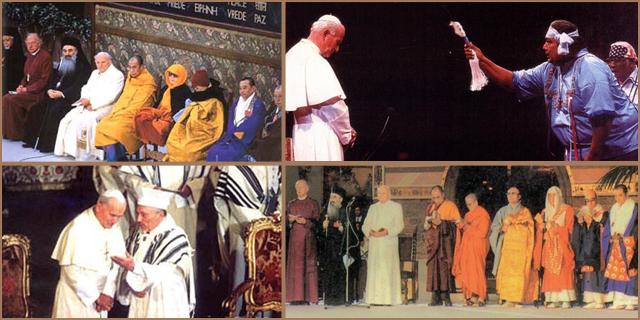 Antipope John Paul II joined the Jewish “service” at the Roman synagogue, bowing his head while singing “we await the coming of the Messiah”.

This is a clear negation of faith in Jesus Christ as the Messiah, and therefore a total rejection of the foundation of the Catholic Faith!

During his many trips to Africa, he received a “blessing” from snake worshipers, and during his journey to India he accepted “Tilak” or a ritual mark on his forehead.

In Assisi, he prayed with animists and sectarians to their deities, or demons.

He allowed the Buddhists to place the Buddha statuette on the tabernacle in the church in order to perform their rituals.

The holy martyrs of the Catholic Church died a martyr’s death and after terrible torture for Faith. Often only because they did not want to pay homage to other idols. And this heretical “Judas” did it with full awareness and impersonation of the Holy Catholic Church.

Antipope John Paul II kissed the Koran and thereby confirmed that he was the heretic.

Following the example of his spiritual father, the antipope heretic Paul VI propagated the “cult of man”:

Man must be affirmed for himself … What is more, man must be lοved because he is man; love must be claimed for man by reason of the particular dignity he possesses. (June 2, 1980). 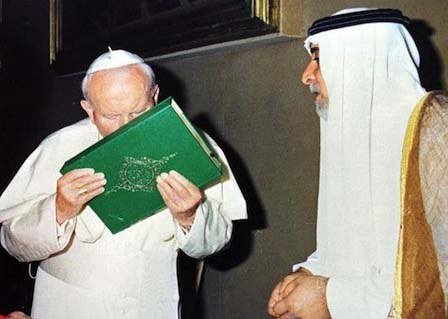 In his book “The Sign of Opposition” he juxtaposes the thoughts of the heretic Teilhard de Chardin with the Genesis.

As an antibishop, he began introducing his “personalist” and “existential” ideas – referred to as his “Heidegger-Husserl-Schelerist concepts” – to the key document of the Vatican II Council entitled “Gaudium et spes”, also known as “the Church in the Modern World.”

This heretical document, even objectively in the world, was called a “treaty unworthy of the Catholic Council” and “a dubious compromise with everything that underlies all evil that plagues humanity.”

Following his predecessors in the antichurch, he propagated the Neoplasm mass as a Catholic Mass.

On April 30, 1983, he presided at the concelebrated Neoplasm mass in the huge Hall of Paul VI in the Vatican under the auspices of the I International Congress of priests and religious, which was concelebrated with 5,500 spiritualists of Vatican II, including 18 Anglican clergy, a pack of Lutheran and reformed pastors and several Orthodox “popes”.

His close friend was heretic Karl Rahner, the favorite of modernist heretics of intellectuals and probably the most influential person in the Vaticanum II Antichurch, who was condemned by the last Pope Pius XII, and “rehabilitated” by the antipope heretic Paul VI. 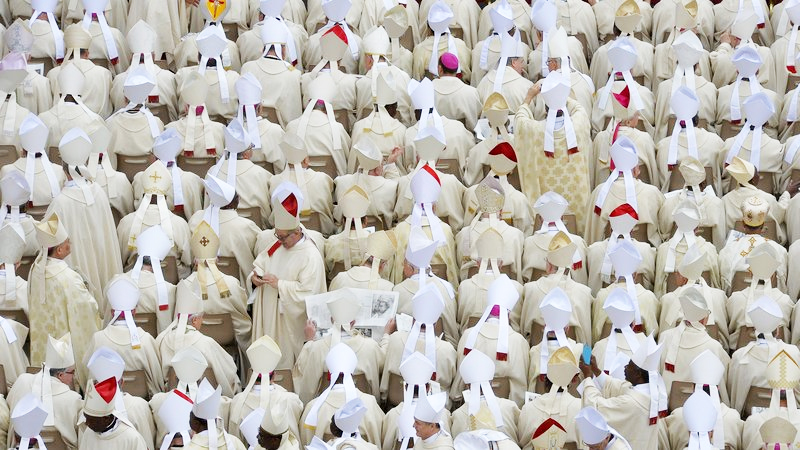 Apocatastasis, heresy that all people will be saved

The assumptions made by the Antipope John Paul II show that all people are saved.

The use of the word “all” instead of “many” in Neoplasm mass of the Vaticanum II sect is therefore not accidental.

Christ once and for all has acquired salvation for man – for every man and for all people who no man can break free from his hand … Who can change the fact that we are redeemed – a fact as powerful and fundamental as creation itself. We have become the property of the Father again thanks to this Love, which does not retreat before the disgrace of the Cross to be able to guarantee to all people: “no man shall pluck them out of my hand” (Jn 10, 28). Today the church proclaims the Paschal certainty of the Resurrection, the assurance of salvation.

Almost the same is announced in “Dives in misericordia”:

… that mystery of election refers to every man and woman, to the whole great human family. (4, 12).

And he repeats the same in “Redemptor hominis”:

… for each one is included in the mystery of the Redemption and with each one Christ has united himself for ever through this mystery. (13, 3)

The Catholic Church proclaims a completely different teaching given, for example, by the Synod in Queriers in 853:

The Almighty God wants all people to be saved without exception, even though not all people will get salvation. In turn, that some people are being saved, is a gift of the saving God; but the fact that others die is the fault of the perishing.

and from the Holy Bible:

A fragment of his doctoral thesis entitled “The Question of Faith under Saint John of the Cross” (written on the Angelicum in Rome under the direction of Garrigou Lagrange):

Faith … not only does not reveal any knowledge or science, but as we have said, it blinds the soul and deprives it of all other knowledge and science that can not properly judge. Other types of knowledge can be acquired through the light of the mind, but knowledge that comes from faith is absorbed without the light of the mind. Faith negates the natural light, and if that light is not blacked out, faith dies.

Saint Paul preached exactly the opposite, that the unbelievers, those who have no faith, have a blind mind:

… In whom the god of this world hath blinded the minds of unbelievers, that the light of the gospel of the glory of Christ, who is the image of God, should not shine unto them. (2 Kor 4, 4)

In his catechesis of April 14, 1982, he denied the superiority of virginity over marriage and accused the Manichean tendencies of those who follow the Catholic doctrine expressed in the Canon of the Council of Trent (Session XXIV).

In a similar way, he spoke at least eight times.

Thus he followed the path of Jowinian the heretic (4th century).

He proclaimed, among other things, the same value of marriage and virginity chosen for the love of God, and that Catholics who refused this view by preaching celibacy over marriage fell into Manichaeism.