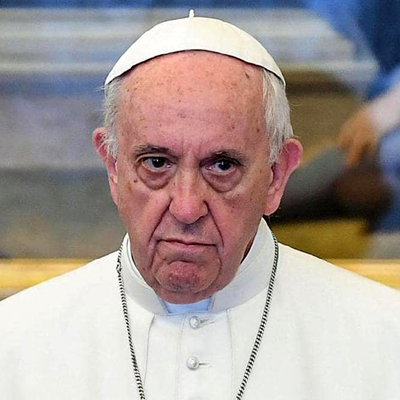 So he was never ordained a Catholic priest, which means that he is simply a secular person.

Consequently, even if miraculously converted to Catholic faith, he would not be able to perform the function of a Catholic priest because he has no priestly power needed for the Eucharistic transformation.

On May 20, 1992, the Antipope John Paul II appointed Bergoglio as the auxiliary Antibishop of Buenos Aires.

On June 27, 1992, his “antibishop’s consecration” took place, which, of course, is also completely unvalid in the Catholic Church.

As an Anticardinal, he presided the most liturgical-horrendal outdoor children’s “masses” annually, including, among others, the “Pinocchio Mass”.

The Argentine Anglican Bishop, Gregory Venables, praised Bergoglio’s choice as an Antipope, because he told him at an interfaith meeting that Anglicans should be included in the Antichurch without conversion.

One morning he called me to eat breakfast with him and he told me very clearly that the Ordynariat is completely unnecessary and that the Church needs us as Anglicans.

On June 19, 2006, the Anticardinal Bergoglio participated in the “Third Fraternal Meeting of the Community of Evangelicals and Renewed Catholics” in Buenos Aires, where he knelt down to receive a “blessing” from the Protestant – heretic.

In November 2012, Bergoglio, together with the Jewish-Masonic lodge B’nai B’rith of Argentina, was hosting the interfaith liturgy in his cathedral in Buenos Aires.

In Argentina, together with the local Jewish synagogue, he celebrated Chanukah every year.

As an Antipope, he stated that Catholic religion and Judaism are “connected by a very special spiritual bond”.

He deliberately desecrated the tradition of Holy Thursday by celebrating Mass in the prison for juveniles and instead of washing the feet of “priests” (as it is in the Catholic custom), he washed and kissed the feet of twelve prisoners, including two women, one of whom was Muslim. 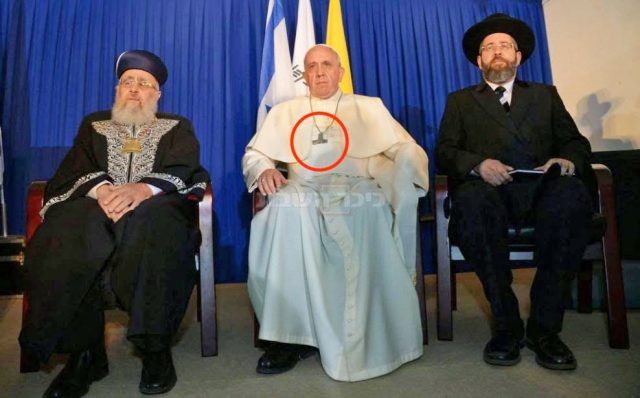 Antipope Francis thinks that there is no Catholic God, doctrinal certainty no longer exists, and whoever claims that he knows the answers to all questions, there is no God in him. In addition, proselytism is nonsense, and atheists can go to heaven.

His claims thus destroy the meaning of the Credo, the nature of God, the possibility of reaching doctrinal truths, the divine mission of converting others to these truths and faith as a requirement of eternal salvation. 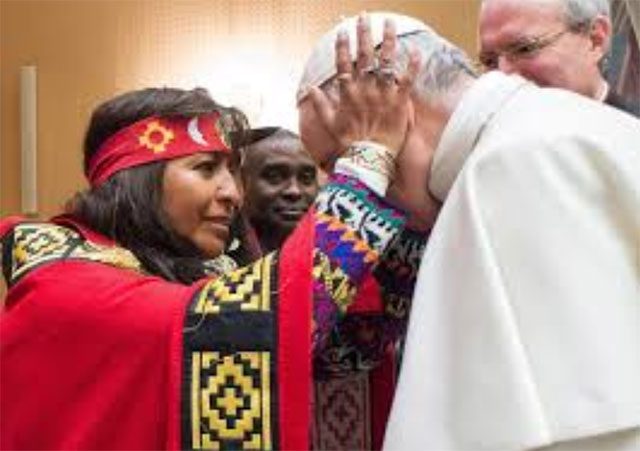 He also said that moral teaching about the 6th and 9th commandments is a chaotic mass of doctrines that can not be stubbornly imposed, nor should one be obsessed with issues such as abortion, homosexual marriages, and contraception. According to him, objective adultery allows heretical “pastoral solutions”. Everyone has their own vision of good and evil, spiritual interference in personal life is impossible (“Who I am to judge”).

These statements depict mortal sins as trifles, brand them as “haunted” those who claim otherwise, trivialize adultery, condemn moral judgments, conscience as autonomous and supreme authority, and as a result they refuse to have the right to impose anything on an individual conscience.

He also addressed the secular Protestant heretic by designating him as his “brother bishop”.

He turns a blind eye to contraception and adulterous “civil unions”, praised the speech of the Anticardinal Walter Kasper for paving the way for the “sacraments” of people living in an adulterous “marriage”.

He praised that his favorite “exorcist” is the Lutheran, secular person and heretic who have neither power nor permission to banish Satan.

He repeatedly avoids blessing the Sign of the Cross and the call of the Holy Trinity, which is a clear sign of the denial of two central dogmas of the holy Catholic faith. 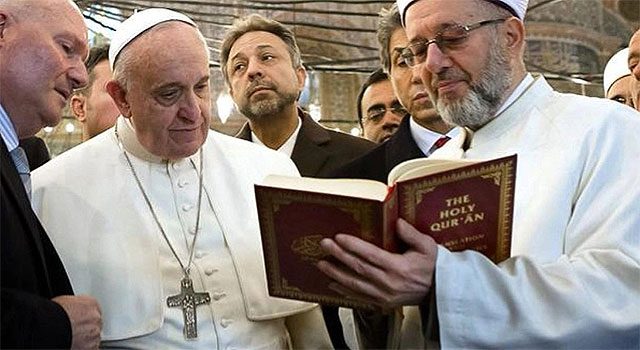 Antipope Francis considers the “charismatic” protestant movement to be a manifestation of the Holy Spirit’s action.

The “charismatic” movement derives from adepts of the Pentecostal movement sect, which was established in the 19th century among Protestants.

It is therefore a movement based on heretical Protestant ideas and practices, including various emotional traits. It emphasizes some external religious experiences with which one could once have been found only in the Pentecostal movement. Nobody will try to convert anyone in this movement – as long as everyone is gathered together into one big, not judging anyone, “happy family”.

It is a clever catwalk of Satan to persuade people to attach these demonic practices to the gifts of the Holy Spirit, which St. Paul mentions in I Corinthians.

Catholic teaching, however, states that the gifts of the Holy Spirit are not necessary and are not acquired through external practices, but are free, extraordinary and transitory gifts given directly for the benefit of others, to help promote the Catholic Faith.

During one of the meetings with such “charismatics”, at the “Catholic Youth Retreat”, participant:

they were persecuted with the charismatic form of the mass on the floor, with various charismatic songs (a lot of waving hands, clapping, rocking to the rhythm of music, where people “fell asleep in the Lord”, that is they were throwing left, right and in the middle of the gathering). There was a lot of music with guitars, drums, tambourines and clapping. One girl began to walk “on all fours” while the young man barefoot circled around the table. During the night, people slept in front of the chapel, shouting, cursing and saying lewdness. 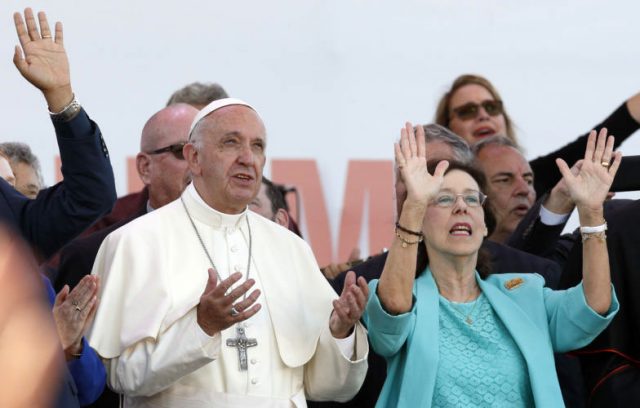 On October 13, 2016 antipope Francis spoke to a group comprised of Lutheran’s and people who claim to be Catholic. In his speech he uttered another astounding heresy. He condemned proselytism, namely converting people to Catholic faith:

It is not licit to convince them (dissenters) of your faith. Proselytism is the strongest venom against the ecumenical path.

So according to the notorious heretic antipope Francis trying to convince someone of your faith is illicit and it is venom. 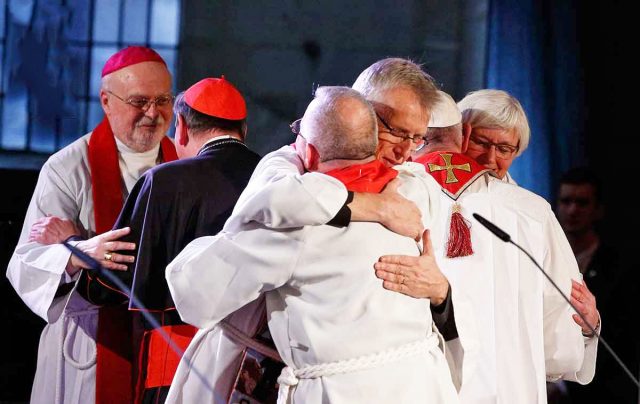 This is simply a condemnation of Jesus Christ and the catholic faith, because the Lord Jesus said exactly the opposite:

And Jesus coming, spoke to them, saying: “All power is given to me in heaven and in earth. Going therefore, teach ye all nations: baptizing them in the name of the Father and of the Son and of the Holy Ghost. Teaching them to observe all things whatsoever I have commanded you. And behold I am with you all days, even to the consummation of the world.” (Matt 28, 18-20).

And he said to them: “Go ye into the whole world and preach the gospel to every creature. He that believeth and is baptized shall be saved: but he that believeth not shall he condemned.” (Mark 16, 15-16).

Antipope Francis declares, therefore, that the main mission for which the Son of God, Jesus Christ, called the Apostles and founded the Catholic Church is wrong and is a venom.

In this way, he preaches the gospel exactly opposite to the Gospel of Christ, and thus the gospel of the antichrist.

As we said before, so now I say again: If any one preach to you a gospel, besides that which you have received, let him be anathema. (Gal 1, 9) 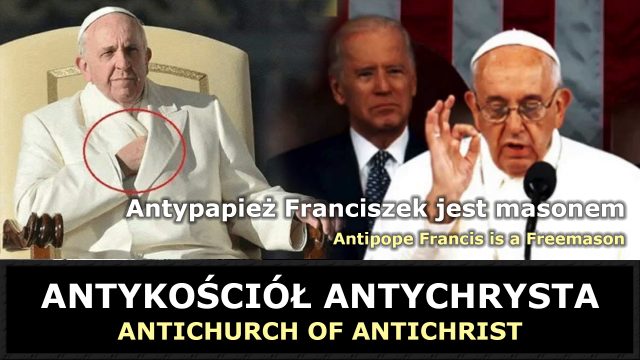 Antipope Francis is a Freemason

On several published photos we can see how Bergoglio makes the sign of the Master of the Second Veil in Freemasonry. This shows that antipope Francis is a Freemason.

The Catholic Church has condemned Freemasonry from the beginnings of its existence:

Freemasonry is our deadly enemy. 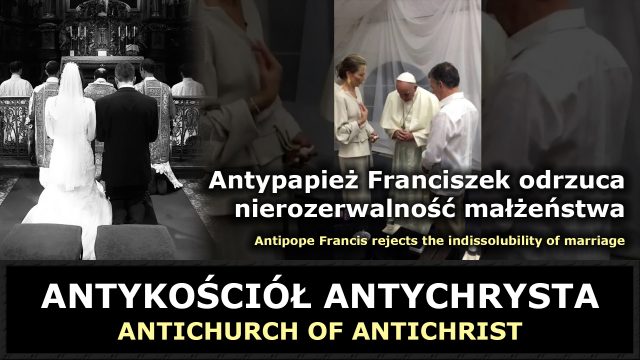 On September 10, 2017, Antipope Francis “blessed” the adulterous civil “marriage” of the Colombian president and his “wife” (concubine).

Antipope Francis teaches the heresy that adulterers are not excommunicated from the Sacraments. He clearly rejects the indissolubility of marriage. He is therefore a heretic.

In 2015 Antipope Francis during his trip to the United States, gave a special audience to an active homosexual and his “boyfriend”, during which he warmly embraced, hugged and kissed them.

This is nothing other, than antipope Francis’s endorsement of homosexual abomination through his actions. 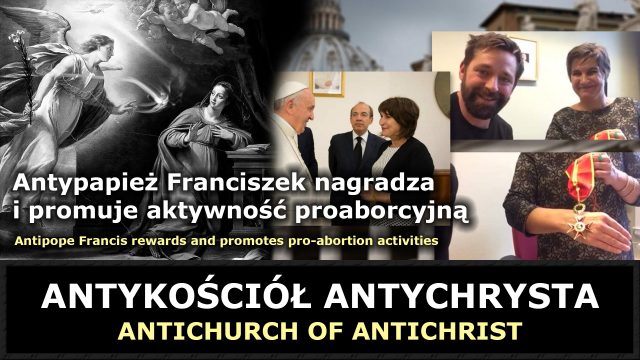 In 2017, antipope Francis awarded a pro-abortion wctivist Lilianne Ploumen a medal of honor in the Order of St. Gregory the Great.

Antipope Francis not only does not “excommunicate” supporters of abortion, but what’s more, he even gives a medal of honor to one of the most notorious pro-abortion activists in the world. 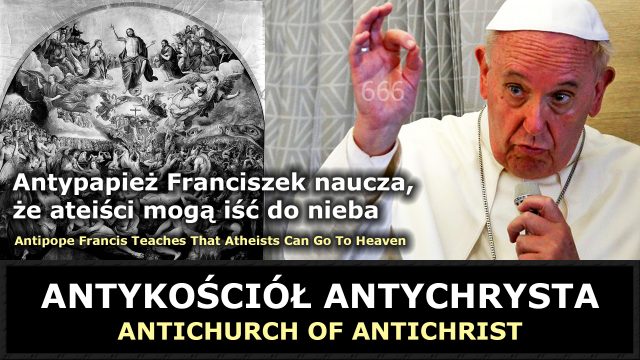 Antipope Francis teaches that Atheists can go to Heaven

On April 15, 2018, antipope Francis paid a visit and met with people from a suburban neighborhood on the west side of Rome.

Instead of telling the child the truth that the atheist father unfortunately went to hell, he said he had “a good heart” that God was “proud of him”. 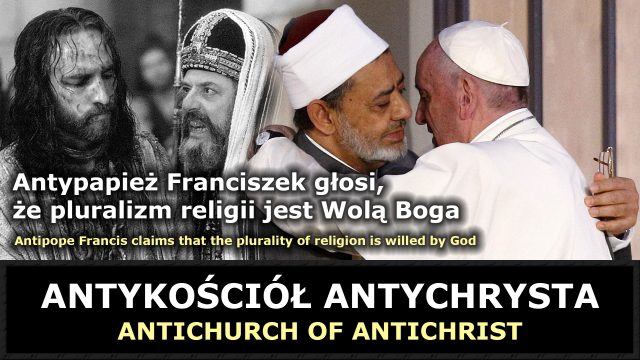 On February 4, 2019, Antipope Francis and Grand Imam of Al-Azhar Ahmad Al-Tayyib, put their signatures to a declaration entitled: “A Document on Human Fraternity for World Peace and Living Together”.

On the occasion of signing the document, Antipope Francis placed the frosting on this devilish cake, giving heresy and blasphemy crying to heaven for vengeance. 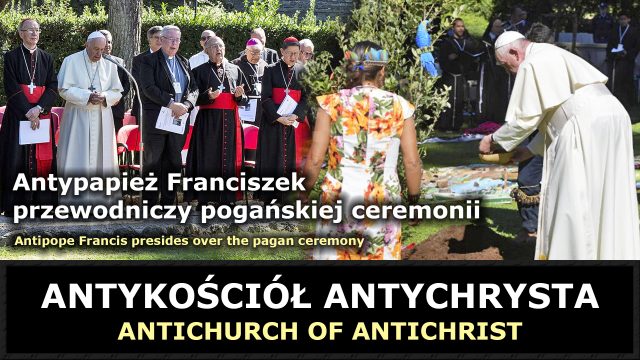 On October 3, 2019, in preparation for the heretical Amazon Synod convened by Antipope Francis in Rome, he approved, invited and participated in a heretical pagan rite.

This pagan ceremony was organized by the Global “Catholic” [sic] Climate Movement, a radical political organization.