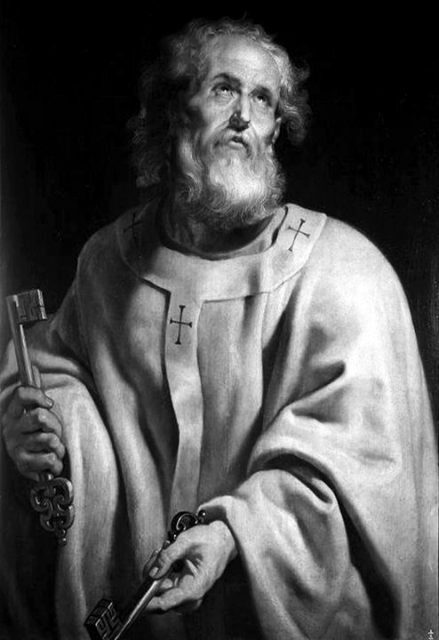 Saint Peter the Apostle was named Simon and was the brother of Saint Andrew the Apostle.

He came from a town located on Lake Genezaret (Galilee).

When Christ the Lord enabled Saint Piotr to join the group of his disciples, Piotr did not immediately join the Lord Jesus, but he still worked as a fisherman. Only after the wonderful catch of fishes, he definitely stayed with Christ as his disciple together with his brother Andrew:

And it came to pass, that when the multitudes pressed upon him to hear the word of God, he (Jesus) stood by the lake of Genesareth, And saw two ships standing by the lake: but the fishermen were gone out of them and were washing their nets. And going into one of the ships that was Simon’s, he desired him to draw back a little from the land. And sitting, he taught the multitudes out of the ship. Now when he had ceased to speak, he said to Simon: “Launch out into the deep and let down your nets for a draught”. And Simon answering said to him: “Master, we have laboured all the night and have taken nothing: but at thy word I will let down the net”. And when they had done this, they enclosed a very great multitude of fishes: and their net broke. And they beckoned to their partners that were in the other ship, that they should come and help them. And they came and filled both the ships, so that they were almost sinking. Which when Simon Peter saw, he fell down at Jesus’ knees, saying: “Depart from me, for I am a sinful man, O Lord”. For he was wholly astonished, and all that were with him, at the draught of the fishes which they had taken. And so were also James and John, the sons of Zebedee, who were Simon’s partners. And Jesus saith to Simon: “Fear not. From henceforth thou shalt catch men”. And having brought their ships to land, leaving all things, they followed him. (Luke 5, 1-11)

In Greek translation: “petros” – stone or “petra” – rock, just like in Latin. It was only in English that the name “Peter” sounded.

He appointed him the first pope of the Catholic Church, at the time when he was the first to confess faith in him as the Messiah and Son of God:

And Jesus came into the quarters of Cesarea Philippi: and he asked his disciples, saying: Whom do men say that the Son of man is? But they said: Some John the Baptist, and other some Elias, and others Jeremias, or one of the prophets. Jesus saith to them: “But whom do you say that I am?”. Simon Peter answered and said: “Thou art Christ, the Son of the living God”. And Jesus answering said to him: “Blessed art thou, Simon Bar-Jona: because flesh and blood hath not revealed it to thee, but my Father who is in heaven. And I say to thee: That thou art Peter; and upon this rock I will build my church, and the gates of hell shall not prevail against it. And I will give to thee the keys of the kingdom of heaven. And whatsoever thou shalt bind upon earth, it shall be bound also in heaven: and whatsoever thou shalt loose on earth, it shall be loosed also in heaven”. (Matt 16, 13-19) 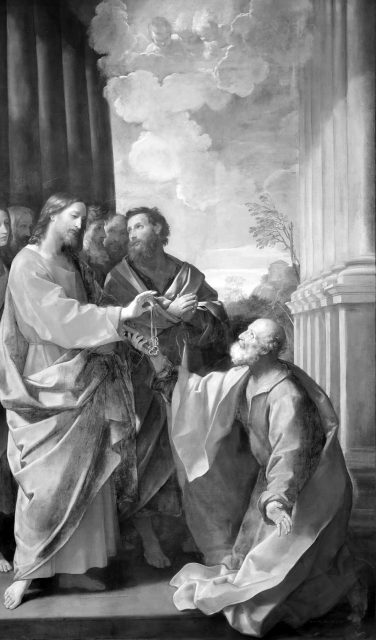 Saint Peter left two letters, which belong to the books of the New Testament.

He dictated it to his student Sylvanus:

By Sylvanus, a faithful brother unto you, as I think, I have written briefly: beseeching and testifying that this is the true grace of God, wherein you stand. (1 Pet 5, 12) 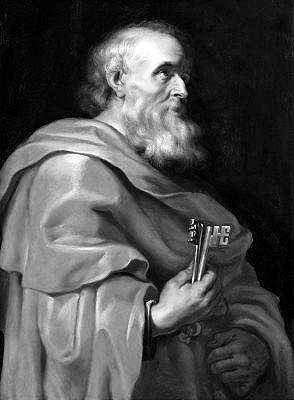 He taught in them as Pope:

Knowing that you were not redeemed with corruptible things, as gold or silver, from your vain conversation of the tradition of your fathers: But with the precious blood of Christ, as of a lamb unspotted and undefiled. (l Pet 1, 18-19)

The ancients therefore that are among you, I beseech who am myself also an ancient and a witness of the sufferings of Christ, as also a partaker of that glory which is to be revealed in time to come: Feed the flock of God which is among you, taking care of it, not by constraint but willingly, according to God: not for filthy lucre’s sake but voluntarily: (…) And when the prince of pastors shall appear, you shall receive a never fading crown of glory. (1 Pet 5, 1-2.4)

And do you all insinuate humility one to another: for God resisteth the proud, but to the humble he giveth grace. Be you humbled therefore under the mighty hand of God, that he may exalt you in the time of visitation (…) Be sober and watch: because your adversary the devil, as a roaring lion, goeth about seeking whom he may devour. Whom resist ye, strong in faith: knowing that the same affliction befalls, your brethren who are in the world. But the God of all grace, who hath called us unto his eternal glory in Christ Jesus, after you have suffered a little, will himself perfect you and confirm you and establish you. To him be glory and empire, for ever and ever. Amen. (1 Pet 5, 5b-6.8-11)

The first letter Saint Peter wrote from Rome about 63 years before the persecution, aroused by Cesar Nero.

The second letter, written also from Rome, was probably edited in prison because Saint Peter writes about his imminent death in it.

… Being assured that the laying away of this my tabernacle is at hand, according as our Lord Jesus Christ also hath signified to me. (2 Pet 1, 14)

According to Origen’s testimony, he was crucified down at his own request, for he felt unworthy to die on the cross as Jesus Christ did.

The crucified Saint Peter appeared to Saint Peter Nolasco, who lived at the turn of the twelfth and thirteenth centuries. One of the prominent Spanish painters Francisco de Zurbarán (1598-1664) immortalized this in the painting. 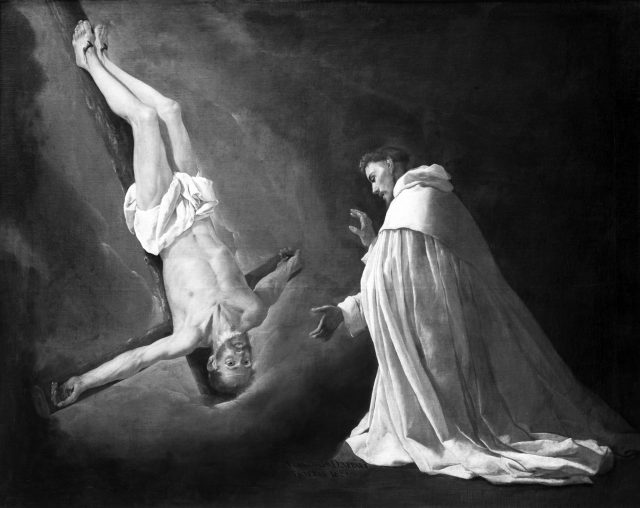