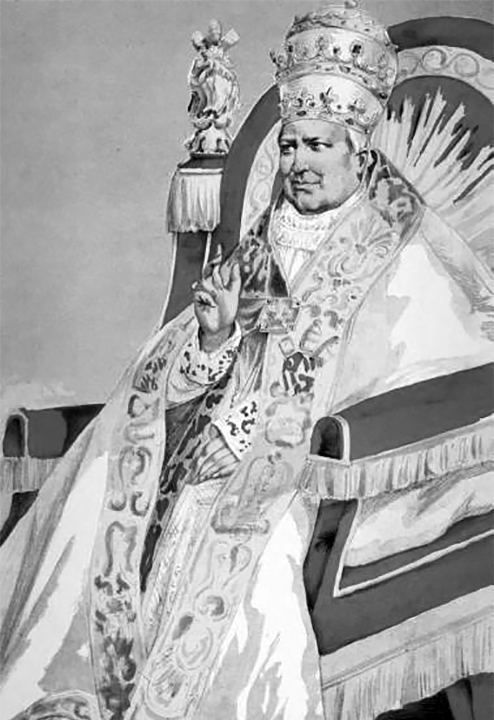 Undoubtedly he was not a liberal, as some said, because he was appointed Cardinal by Gregory XVI, who was extremely sensitive to all innovations in the field of faith.

As the Pope, as soon as he strengthened his influence in the Vatican, he showed that he was far away from liberalism, and all because, as soon as he became Pope, he was expelled from Rome by those who introduced new ideas. This event made him see what liberal ideas are about. He returned to Rome as a steadfast conservative.

Already in his first encyclical “Qui pluribus” of November 9, 1846, he clearly outlined the impassable barrier between the freedom postulated by the liberals and the Catholic doctrine.

In this encyclical he condemned erroneous biblical teachings, religious indifferentism, communism and the freedom of printing.

On December 8, 1854, he proclaimed the apostolic constitution “Ineffabilis Deus”, in which he acknowledged the dogma of the Immaculate Conception of the Blessed Virgin Mary.

This dogma was confirmed by the Mother of God herself, revealing herself in Lourdes in 1858 and presenting herself with the words: “I am the Immaculate Conception”.

On July 30, 1864, the Pope published the encyclical “Ubi Urbaniano”, addressed to the bishops in the Kingdom and the Russian Empire.

The Polish clergy were grateful to the pope for this encyclical, because it was an act of recognition for the repressed priests and for the consolation of the persecuted Polish society.

His pontificate lasted 31 years, 7 months, 21 days (11559 days) and was the longest since the pontificate of Saint Peter.

Although the children of this world are more cunning than children of light, their tricks and rapes would undoubtedly be less successful if among those who call themselves Catholics, there were not those who reach out to them with a friendly hand. Yes, unfortunately, there are those who give the impression that they want to walk in harmony with our enemies and try to lead a covenant between light and darkness, to the arrangement between justice and darkness, using the doctrines of so-called liberal Catholicism. (…) They are much more dangerous and harmful than declared enemies, (…) because, keeping within their limits condemned views, they assume an honesty and purity of doctrine, muttering unwary advocates of agreement and deceiving honest people who would oppose a clear mistake.

One of the most important points in the pontificate of Pius IX was the convocation of the Vatican I Council, which began on June 29, 1868.

Over 700 clerics participated in it.

The invitations to the Council, in the form of an incentive to return to the Catholic Church, were also sent to Eastern churches and Evangelicals, but they were not accepted.

During the Council, on July 18, 1870, the constitution “Pastor aeternus” was passed, containing the dogma of infallibility of the pope in religious and moral matters.

It means that the Pope enjoys the gift of proper understanding and explanation of the truths of faith, because he is the successor of Saint Peter:

(…) with the approval of the Sacred Council, we teach and define as a divinely revealed dogma that when the Roman Pontiff speaks ex cathedra, that is, when, in the exercise of his office as shepherd and teacher of all Christians, in virtue of his supreme apostolic authority, he defines a doctrine concerning faith or morals to be held by the whole Church, he possesses, by the divine assistance promised to him in blessed Peter, that infallibility which the divine Redeemer willed his Church to enjoy in defining doctrine concerning faith or morals. Therefore, such definitions of the Roman Pontiff are of themselves, and not by the consent of the Church, irreformable.

An important conciliar resolution was also the constitution “Dei Filius” about the Revelation and the relations between faith and reason, especially important in the context of the development of science at that time. 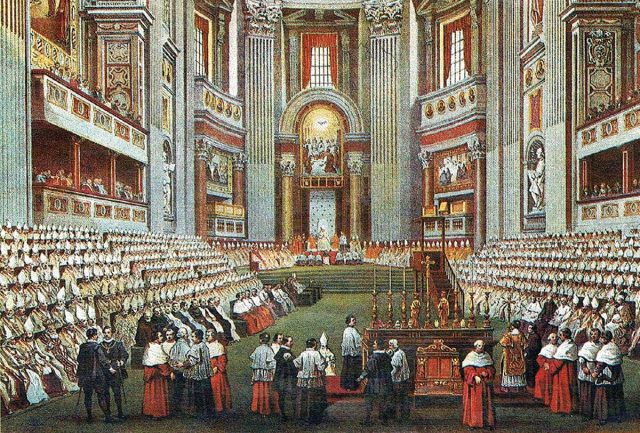 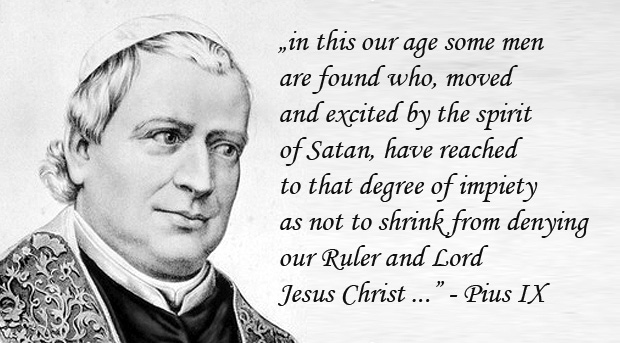 … they do not fear to foster that erroneous opinion, most fatal in its effects on the Catholic Church and the salvation of souls, called by Our Predecessor, Gregory XVI, an “insanity”, that “liberty of conscience and worship is each man’s personal right” …

Therefore, by our Apostolic authority, we reprobate, proscribe, and condemn all the singular and evil opinions and doctrines severally mentioned in this letter, and will and command that they be thoroughly held by all children of the Catholic Church as reprobated, proscribed and condemned. 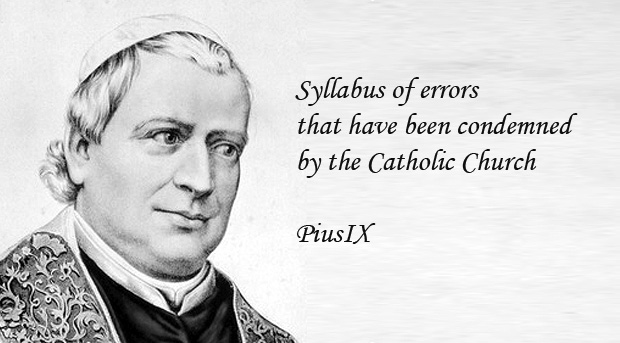 Document issued by Pope Pius IX in 1864 as an addition to the encyclical “Quanta cura”.

The document condemned, among others, the ideas of religious freedom, separation of the state from the Church, pantheism, naturalism, rationalism, indifferentism, latitudynarisism, socialism, communism, secret societies, biblical societies and liberal associations of clergy. 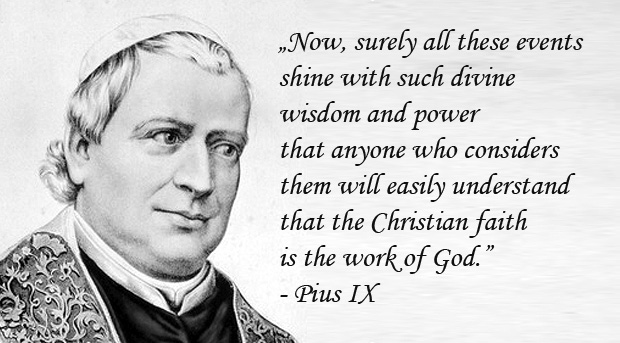 For although faith is above reason, no real disagreement or opposition can ever be found between them; this is because both of them come from the same greatest source of unchanging and eternal truth, God. They give such reciprocal help to each other that true reason shows, maintains and protects the truth of the faith, while faith frees reason from all errors and wondrously enlightens, strengthens and perfects reason with the knowledge of divine matters.