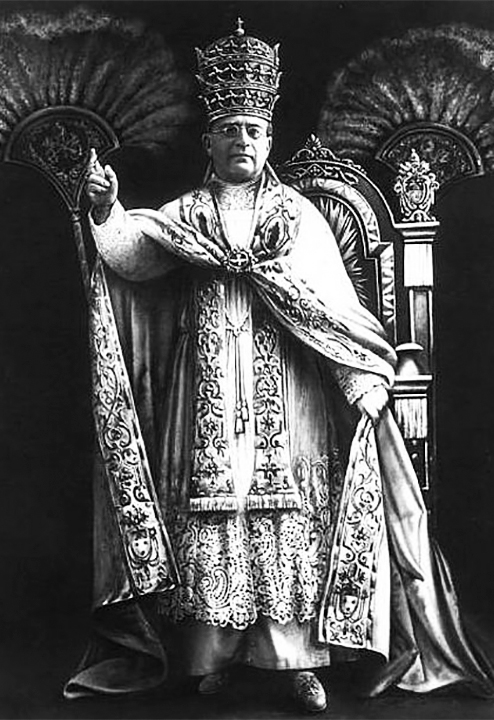 He took the name “Pius” (Pious) XI, and after the coronation he gave the blessing “Urbi et Orbi” from the loggia of the Basilica of St. Peter.

As his motto he accepted the “Pax Christi in Regno Christi (The Peace of Christ in the Kingdom of Christ)”, he decided to get involved in mitigating the effects of war in the world.

One of his first initiatives was the inauguration (December 23, 1922) of the Catholic Action.

On December 11, 1925, Pius XI proclaimed the encyclical “Quas primas”, which he established the Feast of Christ the King with his own Officium and Holy Mass.

At the turn of the 1920s and 1930s, he published a series of encyclicals (“Divini illius magistri”, “Casti conubii”, “Quadragesimo anno” and “Nova impendet”), in which he expressed the Church’s position on matters relating to Christian upbringing, the definition of marriage, methods of contraception and unemployment.

He was keenly interested in the subject of the mission, he opposed the situation in Mexico and Russia, where the Catholics were persecuted. He took strong steps to establish diplomatic relations with many countries. It led to the signing of over 20 agreements.

He helped to develop the idea of the first Fridays of the month as the reparation of the Heart of Jesus for the sins of humanity.

In 1931 he introduced the Feast of the Holy Mary, the Mother of God, celebrated on 1 January. 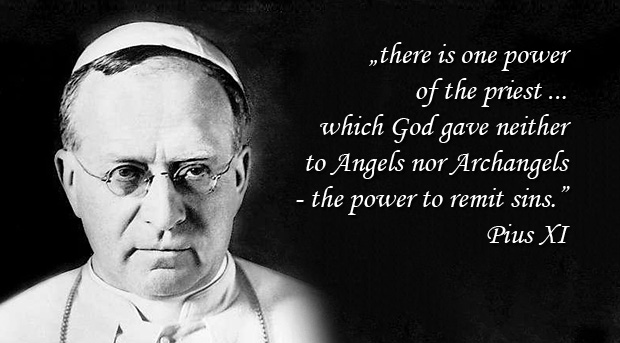 Jesus Christ at the Last Supper instituted the sacrifice and the priesthood of the New Covenant … at the Last Supper, the same night in which He was betrayed, in order to leave to His beloved spouse the Church, a sacrifice which should be visible, which should represent that bloody sacrifice, once and for all to be completed on the cross, which should perpetuate His memory to the end of time, and which should apply its saving power unto the remission of sins we daily commit, … offered to God the Father, under the appearance of bread and wine, His Body and Blood, giving them to the apostles (whom He was then making priests of the New Covenant) to be consumed under the signs of these same things, and commanded the Apostles and their successors in the priesthood to offer them, by the words “Do this in commemoration of Me”.