The Medallion of Saint Benedict – true and false

The power of the sign of the Holy Cross is so great and terrible for Satan that it is for him an inaccessible shield behind which we can feel safe and secure. The approval of the Catolic Church in Rome in 1857 is proof that by using this medallion and praying through Saint Benedict’s intercession, you can ask God for many favors.

The Medallion of Saint Benedict is effective in the following cases:

• destroys superstitions and devil influences
• distances the sorcerers, heals animals that are affected by the plague
• defends a man against devil
• converts sinners, often on deathbed
• destroys the power of poison, removes the plague
• restores health, especially to those who suffer from gallstones, side pain, blood spitting
• gives mothers a happy childbirth
• protects against lightning and storms
• protects against impure temptations

An effective way to use the medallion of Saint Benedict:

• the medallion should be worn around your neck
• in case of epidemics, contagious diseases, we hang it on the walls or door of the house
• during the construction of houses, churches, etc., the medallion becomes embedded in the foundations
• against bugs on fields, in gardens, orchards: the medallion is buried in the ground
• in the homesteads where there is a well, a dedicated medallion is placed in the well
• it is thrown into the water, drinking water gives health to people and animals, and helps in other diseases
• in cases of digestive problems, liver, stomach, lack of appetite, drink a glass of unboiled water, immersing the medallion in the water for a few moments, expressing with the living faith the following prayer:

Saint Father Benedict, powerful miracle worker and merciful guardian of those in need, we are begging you humbly, we beg you to pray for grace for us … (here the grace we ask for) for which we care a lot through Jesus Christ our Lord. Amen.

The only true Catholic medallion of Saint Benedict from 1664 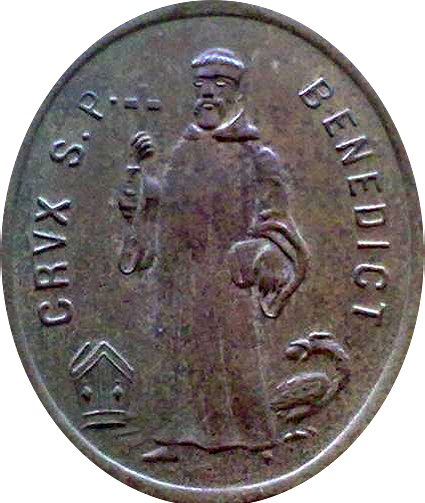 The upper side of the medallion of Saint Benedict (obverse):

• presents Saint Benedict, the founder of the Benedictines holding the Cross in his right hand, and in the left the book of the Holy Rule
• on the left side of the Holy is the miter of the Abbot of the Benedictine order, the equivalent of the episcopal miter
• on the right a crow with folded wings, humbly carrying bread in its beak
• there is an inscription around the Holy figure: Crux Sancti Patris Benedict (Cross of Saint Benedict). 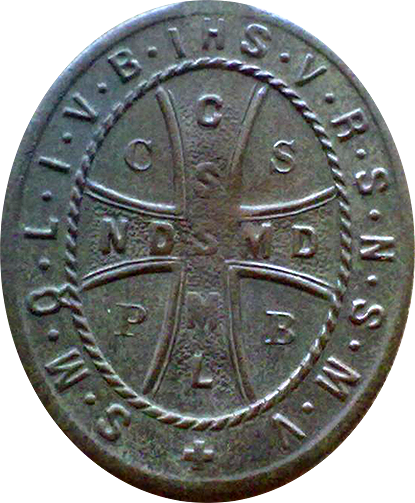 The bottom side of the medallion of Saint Benedict (reverse):

• at the very top there are the letters IHS, which means: Iesus Hristus Salvator (Jesus Christ the Savior)
• in the middle is the original Saint Benedict’s Cross (without any quirks)
• on four fields designated by the arms of the Cross there are letters: CSPB, which means: Crux Sancti Patris Benedicti (Cross of Saint Benedict)
• on the vertical cross bar from top to bottom: CSSML, which means Crux Sacra Sit Mihi Lux (let the Cross be my light)
• on Cross cross-beam: NDSMD, which means Non Draco Sit Mihi Dux (Let the devil/dragon not be my guide)
• there is an inscription on the edge of the medallion; letters on the right: VRSNSMV-SMQLIVB, which means: Vade retro Satana, Numquam Suade Mihi Vana – Sunt Mala Quae Libas, Ipse Venena Bibas (Go away satan, do not tempt me to vanity, it’s bad what you suggest, drink poison yourself) 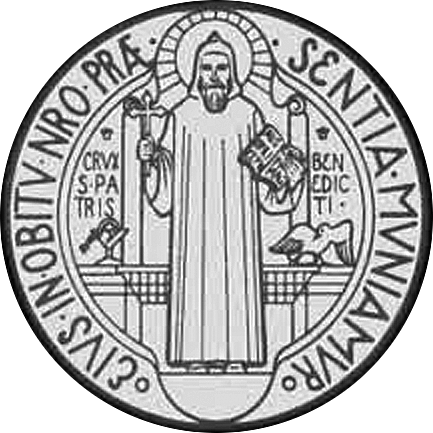 Upper side of the medallion (obverse):

• Saint Benedict was placed on the background of the Masonic altar! (characteristic two columns)
• the main inscription has been changed to: Eius in obitu nostro praesentia muniamur (May His presence defend us at the time of death), removing the name of Saint Benedict in the shadow, further background of the medallion (maybe he is not supposed to defend us?);
• on the left side there is a cracked cup from which the serpent crawls out, placed there under the pretext of the event of recognition by Saint Benedict’s poison given to him by the enemies in Vicovaro (the snake as a symbol of Satan (perhaps his presence is to “protect us at the moment of death?!”); The snake on the Catholic medallion should have only one place: under Mary’s foot with the crushed head)
• on the right side the bird has spread wings and “walks past the bread”; it is no longer a “humble” raven, but a masonic symbol of the phoenix, which struts proudly alongside the Body of the Lord 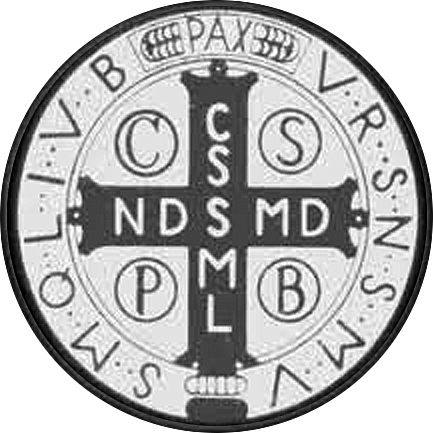 Bottom side of the medallion (reverse):

• IHS was replaced by the word PAX, which means peace; from the medallion, so Jesus Christ is throwed out in the name of peace (but with whom, I think, with Satan)
• the character of the Cross was changed into occult: cross undercut on its base (biting the larva), indentations at the ends signify the fragility of the wood from which it is made
• CSPB letters closed in circles become separate and no longer form a sentence
• other mystery signs at the ends of the cross and next to the word PAX

In the past, always all symbols introduced on Catholic medallions had their Catholic justification.

On the other hand, the authors of this new medallion do not explain the new symbols and motives of the changes. The only statement is that it is a medallion that “combines old and new and is an artistic program”.

The explanation for this is one thing and it is obvious: the enemy of the Catholic Church, changing this miraculous medallion, wants to deprive Catholics of one of the greatest protection against Satan and his ambushes.

Due to the fact that in recent times, even the members of the Vatican II Antichurch, have many fears and remorse about the false medallions of Saint Benedict, the Vatican II sect under the leadership of Bergoglio using “monks” usurpating the name “Benedictines”, beats more and more new patterns of the medallion, which are still more or less different from the sacred original.

The domain of Vatican II Antichurch is to mix the One Holy Truth with satanic falseity, so that by trial and compromise to destroy everything that is holy.

On the example of the medallion, we can see how much anger and hate the antichrist works and those who serve him, who does everything to move people away from all sources of grace. And just as he has moved almost the entire world away from the One True Catholic Mass, he also wants to remove them from other sources of grace that could help people achieve salvation.