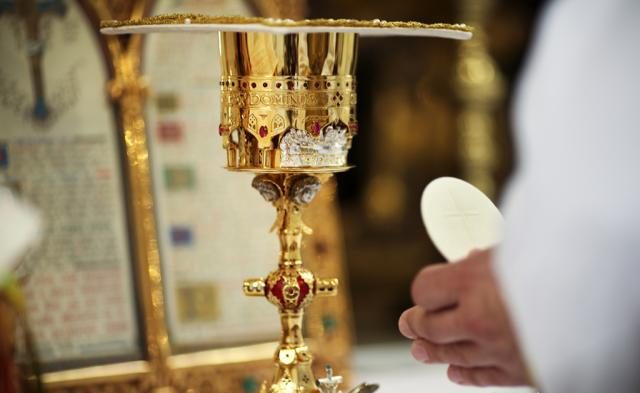 In 1947, Pope Pius XII wrote his momentous encyclical on the Catholic liturgy “Mediator Dei”. He condemned in it at that time certain opinions and practices as errors, such as an altar facing the faithful, a mass in the local language, etc. Above all, he formulates indisputable principles on which the liturgy must be founded to deserve to be truly Catholic.

Here, then, the liturgy must be in harmony with the Catholic faith, it must express it, otherwise the “impeccability of religion revealed by God” is threatened, the existence of the Church founded by Christ is threatened. It is in this dimension that we move when the issue of profound changes in the liturgy arises: here is the endurance of the Catholic religion, when the rite of the Church does not express her faith in an impeccable way.

Hence the epigram, “lex orandi, lex credendi”. (…) The worship she offers to God, all good and great, is a continuous profession of Catholic faith and a continuous exercise of hope and charity, as Augustine puts it tersely. “God is to be worshipped”, he says, “by faith, hope and charity”. (St. Augustine, Enchiridion, 3) – Pius XII, Mediator Dei

Liturgy is a faith melted into prayer

The Church’s liturgy is not only a prayer, it is something more: it is a faith melted into a prayer, a dogma melted into prayer. Hence, if priests and faithful for twenty years and more, for example, pray for an ecumenical way, then in time they begin to believe in the same way. If we pray after Protestant for years, our faith will become Protestant – slowly, unnoticed, but it will certainly happen because “lex orandi, lex credendi” – the law of prayer is the law of faith.

Since the first centuries, the Church has been aware of this, that is why she watches jealously and sternly for the cult of God, wishing he would express the Catholic faith, not allowing the faithful lambs to be deceived into poisoned pastures, where their faith would be damaged. It is not the case that the Catholic faith I have is one thing, and the rite of the Mass is the second thing. The rite of the holy mass is a faith shed in prayer. And therefore, if someone changes the “lex orandi” (the law of prayer) in depth, he also changes “lex credendi” (the law of faith).

What is Holy Mass?

Herette text in the first edition of Mason Bugnini, co-author of Mass Neoplasm, read as follows:

The feast of the Lord, the Holy Mass is a holy gathering of the People of God who gather under the guidance of a priest to commemorate the Lord. Therefore, the words of Christ in a special way refer to the local assembly of the Holy Church: “For where there are two or three gathered together in my name, there am I in the midst of them.” (NOM, §7, II. Cap.)

This definition of the Holy Mass is unacceptable for a Catholic!

The Holy Mass is neither a “feast of the Lord” nor a “holy gathering or gathering of the People of God” but the bloodless exercise of the cross sacrifice of Christ.

The actual presence of Christ is limited to a purely spiritual presence, where “two or three gathered together in my name”, that is to say, renounce the Catholic faith, that is, become a Protestant. 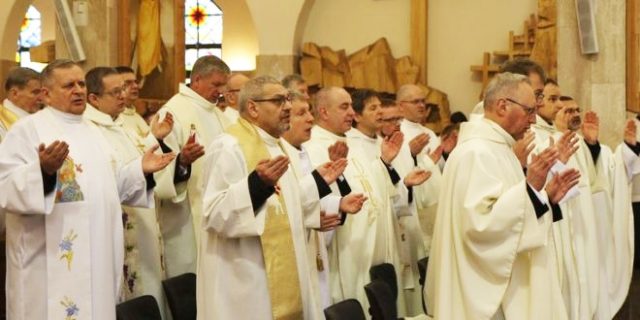 If anyone says that Christ received in the Eucharist is received spiritually only and not also sacramentally and really, let him be anathema. (Council of Trent, s. 13, can. 8.)

Later, under the influence of a number of “bishops”, a link to the teaching of the Council of Trent was added, which – ex post – gives the text an ambiguous meaning:

In the celebration of the Mass, which makes the sacrifice of Christ present all the time, Christ is truly present in the community that gathers in His name, in the person of the celebrant, in His word, as well as essentially and permanently under the Eucharistic species. (§7, II. Cap.)

Confusion of truth and falseness is the main domain of the Vaticanum II sect. This text, however, supporting the teaching of the Catholic Council of Trent, gives them immediate doubt, placing Christ’s presence in the Sacrament of the Altar on par with His presence “in community, in celebrant, in word …”

In any case, the Catholic should not take part in the mass neoplasm invented by the Vaticanum II sect.

The current head of Vatican II Antichurch, Jorge Mario Bergoglio aka Francis is a heretic, and therefore he is not a Catholic, let alone a Catholic pope.

Therefore, the Catholic is not allowed to participate in the Mass, in which, for a few moments before the consecration, the priest says that Bergoglio is Papa nostro – “our Pope”.

In many parts of the world, the only Tridentine Mass available is the Mass celebrated by a validly ordained priest in the Catholic rite, e.g. from the FFSPX, placing the name of the antipope in the Canon. Why, then, a Catholic, would not simply disregard the insertion in the canon and “just go to Mass”?

There is only one answer: 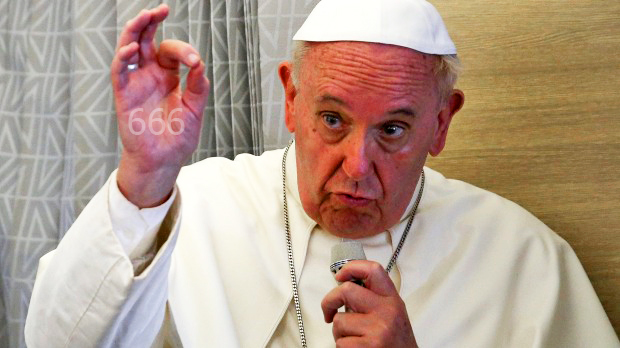 There are two ways of considering this phrase: its linguistic meaning (What does it mean from a grammatical and contextual point of view) and theological meaning (What is the doctrine it expresses?).

From this point of view, the introduction of Bergoglio’s name to “una cum” in the canon confirms that he is a true pope (“our Pope”). Of course, Catholics must reject it. This would confirm that Bergoglio is a member of the Catholic Church, because his name is mentioned in prayer for the Church. Catholics must also reject it. Catholic canonists and theologians clearly teach that the loss of membership in the Catholic Church results in the automatic loss of the power of the papal. Heresy at the pope places him outside the Church, and thus deprives him of office and all jurisdiction.

Fulfilling the Sunday obligation or obtaining sacramental favors in the Mass requires active presence or participation. It is a situation like: everything or nothing. Either you actively participate or you do not.

When a Catholic actively participates in the traditional Mass, it is “cooperation with others in prayers and the duty to worship.” Indeed, moral unity with the priest is required to fulfill the Sunday obligation. The Fathers of the Church state, and Pope Pius XII in the encyclical “Mediator Dei” teaches in particular that the faithful who actively participate in the Mass accept and participate in the prayers of the Canon, which the priests recite, even if they do not pronounce these prayers themselves. So for a Catholic there is no way to avoid it. The active participation in the Mass required to fulfill the Sunday obligation also binds the faithful inextricably to the priest’s activity at the altar. 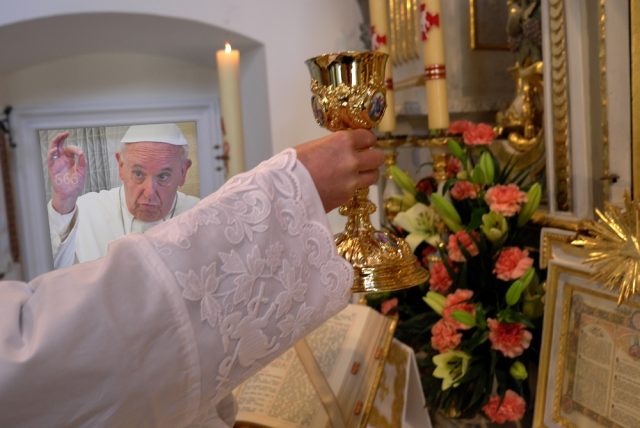 If you are a Catholic, but you are still actively participating in the “una cum” Bergoglio mass, then:
• You preach a fatal lie
• You confirm your oneness with a heretic, so you are heretic yourself
• You acknowledge the ecumenical Antichurch of Antichrist as the rightful Catholic Church
• You indirectly confess the false religion of the Vatican II sect
• You accept violation of church law
• You are participating in sin
• You offer the Mass in unity with heretic antipope Bergoglio
• You grant the usurper the right to a universal church office
• You create an opportunity for a sin of offense
• In the case of Mass celebrated by the clergy of the “resistance movement” (SSPX, related civic associations and many independent priests) you participate in highly offensive masses and justify the sin of schism

This list is based on the teaching of canonists, moralists, theologians and decrees approved by the popes of the Catholic Church.

Doubts that a Catholic may have.

Is Sunday duty not more important?

Does the priest “have good intentions”?

Will I lose the grace flowing from the Mass, and thus I will lose all faith?

You will not receive any graces in the Mass in which you consciously and actively participate in the sacrilegious lie of the Vaticanum II sect and its false religion.

By participating in the Tridentine Mass celebrated by a man belonging to the Vatican II sect and ordained in their rite of priestly ordination, you will not receive a consecrated host in communion, because the celebrant has no priesthood power. And even if you go to Mass celebrated by a validly ordained priest in a Catholic rite (eg from the Society of St. Pius X) and a “good” ciborium with important consecrated hosts, the poisonous errors of these priests about the papacy will ultimately destroy your faith!

Unity with the heretic Bergoglio and his predecessors from the “Vatican II” sect is a mortal sin.

Whoever prays with heretics becomes a heretic himself – St. Agaton 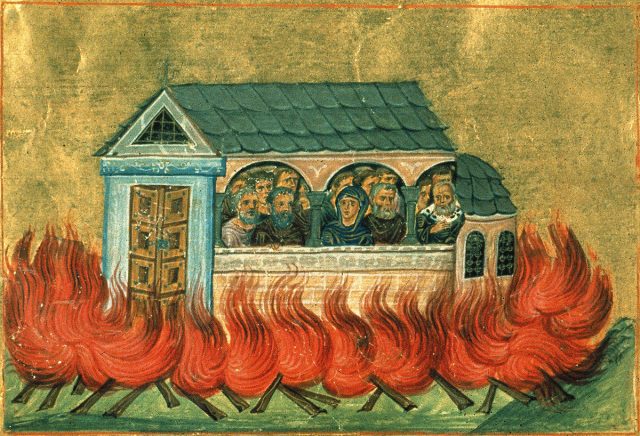 Can a Catholic in his right mind defend the claim that participating in the Mass – in which such a heretic is called a real Catholic pope, and actually celebrated in unity with him – is not offensive to God, and is simply an indifferent matter?

In ancient times, during the persecution, there was a Roman practice that would allow a Christian to avoid death if he only put a pinch of incense into a fire fired in honor of false gods. Time after time, Christians have chosen martyrdom rather than making this one small act of recognition of a false religion. One moving account is in the Roman Martyrdom and is sung every Christmas Eve:

In Nicomedia, the suffering of many thousands of martyrs, who, at the day of the Lord’s birth to the church, gathered together, Diocletian, the emperor made the church door close and fire the fire, and put the coals on the tripod with incense at the door, and call out to the herald with a loud voice they wanted to leave the church, they incensed Jupiter and incense burned Jupiter, which they all answered with one voice, that they would like to die for Christ, burned in the fire and deserve to be born in heaven, on the day that Christ, on earth for the salvation of the world, was born – the Saint Martyrs of Nicomedia.

The Vaticanum II sect and its antipopes try to create a non-dogmatic, ecumenical, one world religion of antichrist.

A great tent for all religions in which each is perceived as more or less good. In this circus there is a place for you, even if you are “attached” to the traditional Latin Mass. All you have to do is recognize Bergoglio as the composer of this circus.

That is precisely what you do when you actively participate in the Mass in which the celebrant preaches in the Canon that he offers the Mass “together with Your servant Francis, our Pope”, all the faithful and followers of the universal and apostolic Faith, and even more so when you participate in the neoplasm mass.

It is better not to have any Mass than to participate in such blasphemy!

Better to die than add a pinch of incense to this ecumenical religion of the antichrist!